5 Wildly Popular Car Modifications That Must Be Stopped

In certain circles (usually Asian-Americans and people who want to pretend they’re Asians), the cool thing is to have a Japanese import that looks like it’s souped up for street racing. If all the modifications are useless and possibly counterproductive, it’s what my people call a “rice rocket.” You probably have to call it something else, or else you’re a racist.

I personally became a junior member of the rice rocket club when I bought a Civic Si with 18-inch rims, and I deal with my guilt by pointing out much more ridiculous rice rockets in a desperate bid to prove I’m still cool. So here’s a few things those dorky people who are completely different from me stick on their cars:

You’ve probably heard of a turbocharger, which is a thing that you put in your engine to make your car faster. I don’t completely understand what it does, and for the purposes of this article, all you need to know is that it’s considered cool to have turbo. Now, there are two ways to let someone know your car has a turbocharger (and that you are therefore cool). One is to put a sticker on it saying so — more on that later — and the second is to make sure everyone hears the sound it makes.

So if you’re putting your thinking caps on, it might be dawning on you that there’s no reason to pay for this: 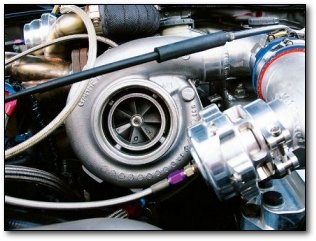 If you can just pay for this: 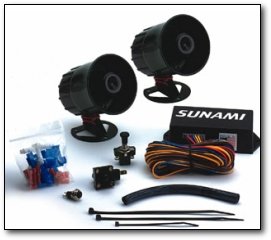 That’s right, that’s a speaker system. A speaker system that can mimic the characteristic turbo sound. It even comes with a switch, so you can turn on the sound at stoplights and near attractive girls. (Feel free to call that sexist if you can show me a video of a girl revving a fake engine to impress a handsome man passing by.)

If you have this thing, I’m not sure why you need a car at all. Every time the girl calls, you just run these in the background and say, “I’m sorry, I’m having trouble hearing you over my turbocharger. Hold on, I have to ramp something.”

Then when you see her in person, just tell her it’s in the shop. The turbocharger shop.

First, you have to understand the difference between a spoiler and a wing. They’re both those little tail pieces on the back of a car whose main functionality on a street-legal vehicle is to look cool and make your trunk a little harder to open. The spoiler is the one with no gap and, just as a random example, here is this completely tasteful Civic Si factory spoiler. 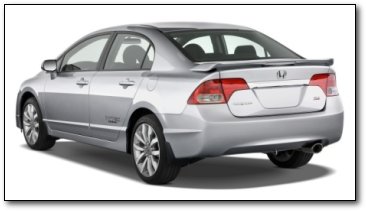 A spoiler’s purpose is basically to decrease the slope of the airflow path down the back of the car, which allegedly decreases drag, increases mileage and keeps your rear window cleaner. Does my tiny two-inch high spoiler really do all that? I don’t know. But even if it doesn’t do any of that Voodoo aerodynamics magic for me, at least it doesn’t hurt my car.

The same can’t be said for wings: 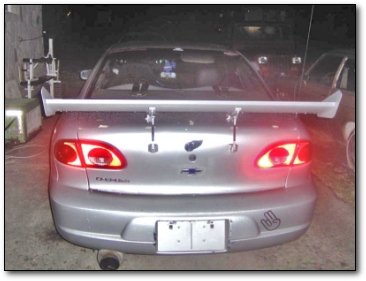 But all the fastest race cars have wings, you might think. I see them on Formula-1-type cars all the time! 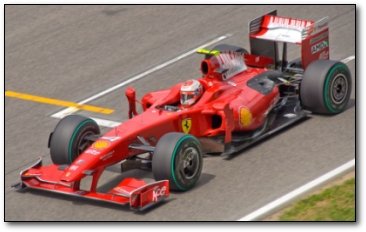 It’s important to remember that F1 cars go really really fast. At those speeds, pushing your tires down (which is what a wing does) actually makes a noticeable difference in steering and control. I’m willing to bet about 70 percent of cars with oversized wings are actually physically unable to reach a speed at which the wing’s downforce would help. 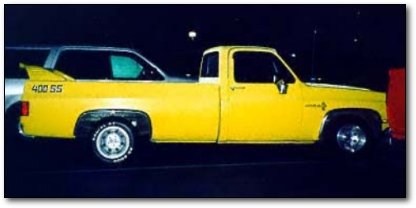 Not only that, but rice rockets almost always have only a rear wing, and have front wheel drive and steering. Basically, if the wing is having any effect, it’s picking up the wheels you want to push down. 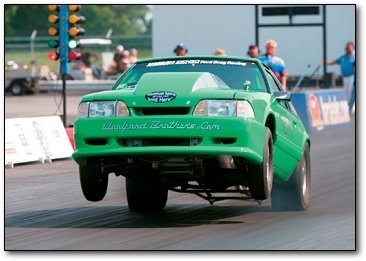 And on top of that, most rice rocketeers wouldn’t know aerodynamics if that scientific discipline took on corporeal form and bit them in the ass. So they end up buying wings that aren’t even shaped for providing any downforce. Hell, they could even be providing lift. Or more likely just being heavy, creating drag and making your car slower than grandma’s stock Corolla in the next lane.

You might think at this point that a giant wing is the stupidest thing you could put on the back of your car but you would be wrong. 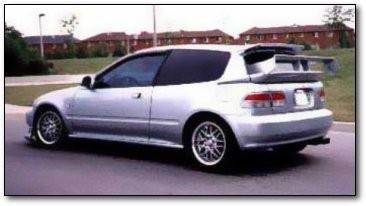 You could put three wings! In a place where no oncoming air can get to them! That’s thinking out of the box, kid.

Are you worried that the bottom of your car is too far away from speed bumps to take any damage, but you don’t want to mess with your suspension by lowering it? Well, “aerodynamic” body kits are for you! 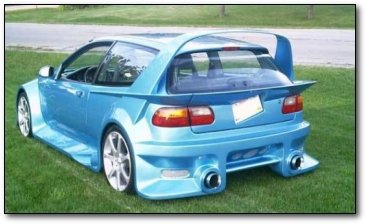 There are two main straws people grasp at to justify a crazy body kit. The first one is that if you get wider wheels (for better traction) they’ll stick out of your wheel wells, and you’d need wider wheel wells to cover the wheels and direct air smoothly over them. I guess that’s technically true.

But that only explains an eighth of that ridiculous setup. The second flimsy straw is the idea of “ground effects,” a real phenomenon where, basically, if you make a tiny narrow space between the car and the ground, it helps pull the car down (that same downforce people want so badly from the wings).

Like the wings, you hardly need that kind of business in a regular passenger car, and in fact you’re probably getting more downforce out of the weight of that stupid body kit than any ground effect aerodynamics it’s generating).

On top of being useless, body kits in the wrong hands can result in some truly disturbing Frankenstein-like creations. 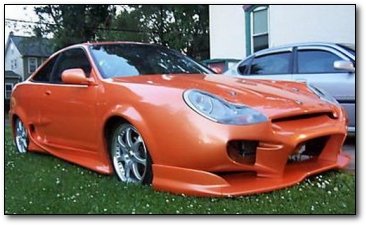 If you know cars, you’ll probably vaguely recognize some of the parts and get an eerie feeling that they don’t belong together. This grass-nuzzling abomination was once a stock Acura Integra. 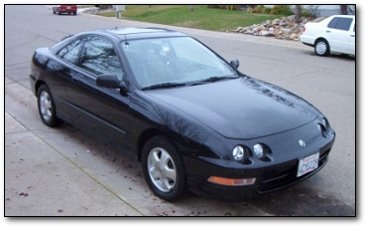 Thanks to a Frankenstein body kit created from a “Porsche 911 molded front end, a Mercedes-Benz hood, a Toyota Supra front body kit, a Nissan 350Z exhaust” and “Lexus IS300 headlights converted to tail lamps with fiberoptic halos,” it has become the creature you see above, begging for death, but unable to exit a slightly sloped driveway to seek it.

Low-profile tires (or “low-pros”) look pretty cool, because you get more wheel and less tire, and shiny chrome looks cooler than dull rubber.

Having bigger wheels means it’s easier for people to see your awesome brakes. And of course you have awesome brakes, since one of the main functional benefits of low-profile tires (and big wheels) is to allow for bigger, more powerful brakes. They also tend to have better handling (on smooth, dry roads), and reduce weight where it counts the most (cars most want to lose weight below the suspension — their wheels are like our asses, I guess).

So why is it that when I bought my Civic Si, it was saddled with a set of 18-inch wheels (Si standard is 17 inches) with low-profile tires that had apparently been passed from car to car by the dealer for four years because buyers hated them and wanted them subbed out? 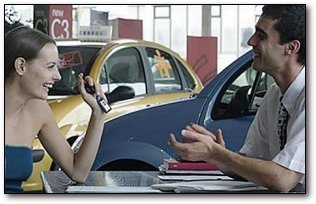 In a word: FUCKING POTHOLES (that’s a prefix that’s required to be attached to the word “potholes” whenever it’s used because fuck potholes). Somehow they talked me into taking the car with the wheels no one wanted (it was the last one in dark gray) and boy was I stupid to do so. They were already cracking around the sidewalls probably due to sitting out in the sun or whatever for four years, and the first pothole I hit cracked the front right tire right open. 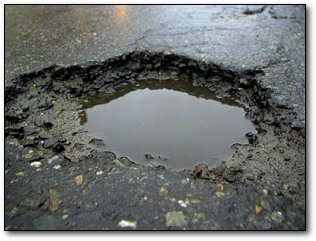 You’d have to be a Tire Jesus to repair that, so I ended up getting two brand new front tires, which they rotated to the back for me, moving the two remaining old ones to the front, where, over this last Christmas vacation, they hit another God damned pothole. Now I have four brand new tires after over a year of owning this car. Did I mention low-pros are expensive and hard to find?

Sure, lots of people tell me how nice my wheels look, but compliments don’t pay $1,000 in tire replacement bills do they. 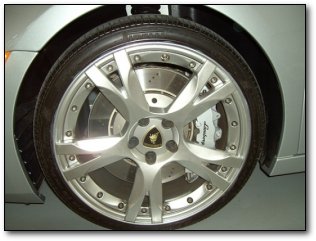 #1
Decals That Belong on Other Cars

The other thing you can do to fake people into believing your car is awesome on the inside is to put a sticker on claiming it’s “turbo” or on such-and-such “racing team.” It’s really important to know what your lying sticker means before you stick it on your shitty car, however.

One big target for copycats was the “Type R” decal on Honda Civics and Acura Integras (both made by Honda), which referred to a very specific top performance line of Civics and Integras: 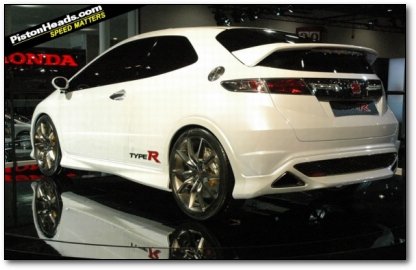 They only imported about 500 a year or something, just enough to make the other ricers envious.

Apparently a great deal of people don’t actually know what “Type R” means outside of “goes fast.” So they put it on their, like, van or something: 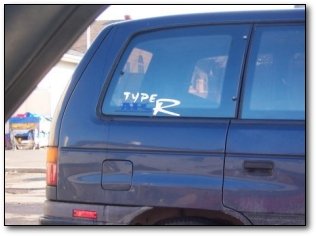 Now obviously that person’s not trying very hard. Here’s someone who doesn’t go halfway, using not only the “Type R” sticker but an actual Acura symbol and other mods to turn their Geo Storm (Slogan: “It’ll get you to work”) into an Acura Integra Type R:

If you look really closely, you can see someone actually wrote “TYPE R” in the dust on the bumper. 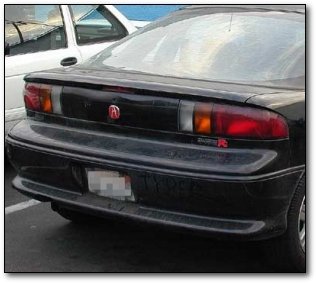 Granted, not everyone can be expected to know what a Type R is. But this next person has no excuse. The side decal down on the metal fairing there says “Powered by HONDA,” (next to the classy fireball) letting you know that this Honda vehicle contains a Honda engine, which is a little Captain Obvious there, but technically accurate.

In light of that, I have absolutely no explanation for the “Toyota Racing Development” windshield decal. Do all our cars look alike too? Racist. 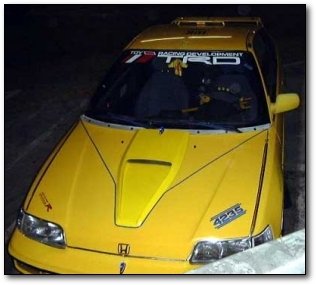 As you can see, I’m still comfortably behind the pack in terms of completely ricing out my car, which means I still have some dignity to spend. I’m planning to spend it on a front windshield decal that says “FRONT WINDSHIELD,” in Japanese.